Each year, 24/7 Wall Street makes predictions on which well-known brand names are likely to disappear in the coming year. Such predictions are risky, of course, and the past predictions have met with mixed success:


Last year, 24/7 Wall Street correctly predicted Suzuki, MetroPCS and Current TV would be out. American Airlines, another predicted failure, is part of a new company through its combination with U.S. Airways, though the American Airlines name lives on. Talbots, which also made that list, was acquired by a private equity firm, and also as expected, Research In Motion is no longer a brand. Predictions regarding Avon, the Oakland Raiders and Salon, however, were incorrect.

This year’s list of brands likely to go away in 2014 has some obvious choices: everybody in retail is wondering whether Penney’s can survive, Mitsubishi has been rumored to be pulling out of the US for a while, and the Nook is clearly in trouble.

The one surprise on the list, to me, was the WNBA. While the league is pretty much ignored by about 99% of the US population, I thought it would go on more or less forever, simply because the NBA wants to look sensitive.  But there appears to be a good argument for the WNBA’s demise – David Stern is retiring, and he has been pretty much single-handedly keeping it alive.


The champion and protector of the Women’s National Basketball Association, David Stern, will retire in February 2014. He has been the all-powerful commissioner of the NBA for three decades. It is hard to imagine how the WNBA could have survived without his support, and that will soon be gone. The league was founded in 1996, and currently has 12 teams. Six teams have disappeared since the league’s beginning, and three have been relocated. Attendance has been awful. [ … ] Owners have little financial reason to support the league. The Chicago Sun Times reported in 2011 that “The majority of WNBA teams are believed to have lost money each year, with the NBA subsidizing some of the losses.” TV viewership is so low it only makes matters worse.

As for the attendance, this graph pretty much tells the story: 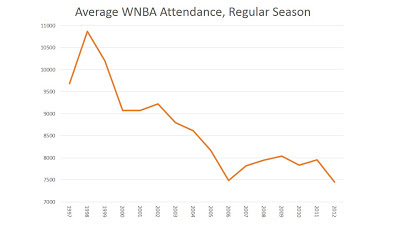 No need for a trend-line on that one, is there? Any new league is going to have difficulties starting out (MLS was hurting big-time in its first few seasons), but the WNBA has now been around for sixteen years, and its best years were back at the beginning, while last year’s attendance was the lowest ever.

TV is a similar story – though there has been some modest improvement. Here are the viewership numbers from ESPN2 over the past several years (both the attendance and TV data are from Wikipedia). 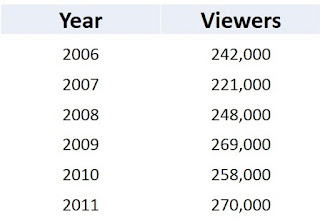 I wasn’t able to get viewership numbers for 2012, but this site says ratings were flat.


WNBA Coverage on Par With Previous Years: WNBA games averaged a 0.20 U.S. rating on ESPN, ESPN2 and ABC during the 2012 regular season, which according to the network is on par with the last two seasons.

ESPN would apparently prefer not to broadcast the games, but are forced into it in order to get the rights to the NBA. According to a book by an ESPN exec, the negotiations back in 2002 went like this:

Though the WNBA was a major negotiating stumbling block, executives above Shapiro eventually shepherded the deal through at Stern’s (angry) insistence.

So will the new commissioner kill the league? It seems likely eventually, but I doubt it will happen in 2014. That seems a bit quick to bring an end to something that Stern probably sees as a big part of his legacy. But I can imagine that the NBA owners might be growing weary of the losses, and skeptical, after this long, that things will ever turn around.

The bigger question is whether anyone will notice or care. If fewer than one out of a thousand Americans watches the games on TV and only minuscule, and growing minusculer, numbers attend, then it seems the answer is pretty much no.

But why has a league born with such advantages failed? Tough to answer, particularly for me, since I don’t like basketball in any form; NBA games are very boring to me, and the endings of the games – which should be the most exciting part, but instead degenerate into an endless series of timeouts interrupted only by a free-throw shooting contest – are worse than watching the America’s Cup.

But against that, I have to admit that there are moments when I will see a particular play and be amazed by someone’s athleticism. The NBA has some great players. The WNBA, on the other hand, has the drawbacks of being the same boring game, with little of the athletic brilliance to offset it.

So I have no explanation, but after sixteen years, I think it's safe to say that time is just about up.

Pre-emptive disclaimer: I’m sure I’ll be accused of misogyny (in the unlikely event that anyone who doesn’t know me reads this), so I’ll state now that I love watching softball and am a big fan of the US women’s soccer team. I’m not a fan of the WNBA (obviously), but that has more to do with it being basketball than with the gender of the players.

But my sports interests are irrelevant to the question of why the league can’t get anybody to watch it.
Posted by Bob Houk at 3:35 AM