Was awakened rudely this morning when my bed moved. It was about 9:40am, so I had to reluctantly admit that I should be up anyway.

It was a 4.2 quake on the Tanon Strait between Cebu and Negros. 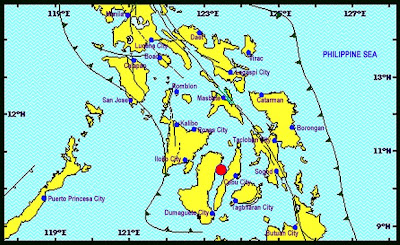 The Philippines sits on several fault lines, which is why we have so many volcanoes (the islands are mostly of volcanic origin), but I must admit that I haven't felt much in the almost-year that I've been here -- I think one or two other little shakes. This one felt a bit stronger, but I think that's because it was fairly close, not because it was such a big quake.

The lines on the map are the major fault systems, so I guess this wasn't on a major fault. Looking at the map, though, it would appear that probably Cebu and Negros were once a single island and are moving apart, so there must be some sort of a fault there. But that's totally speculative. For that matter, it looks like Negros might have been part of Iloilo (the island just to the west of it).
Posted by Bob Houk at 12:55 AM

Email ThisBlogThis!Share to TwitterShare to FacebookShare to Pinterest
Labels: Quakes and volcanoes