The Global Warmists Demonstrate Their Openness to Debate

One of the frustrations of the global warming debate is that there is none. Anyone who has any questions is derided as a knuckle-dragging Neanderthal, a science-denier, or worse. The academic establishment passes notes among themselves freezing out skeptics from publication in journals. “The science is settled,” intones the noted scientist Al Gore.

This extends to universities, which once were noted for being (or at least trying to be) places where ideas are openly discussed and examined. That is less true than it once was, in all areas, I’m afraid – especially in the Humanities and Social Sciences. But even in one of the hard sciences, Meteorology, the sign is out: “Questioning Authority Forbidden.”

Nothing could demonstrate the current state of meteorological thinking than this picture of two professors at San Jose State University. 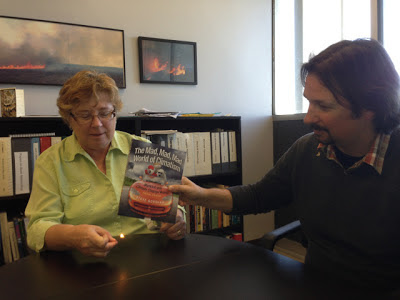 The caption on the picture read:  This week we received a deluge of free books from the Heartland Institute. The book is entitled "The Mad, Mad, Made World of Climatism". Shown above, Drs. Bridger and Clements test the flammability of the book.

The picture appeared on the website of the Department of Meteorology and Climate Science. It has now, of course, been sent down the Memory Hole, but you can see it here.
Posted by Bob Houk at 6:29 AM