Why Isn’t ‘Pitiful’ the Opposite of ‘Pitiless’?

I have just finished reading Piccadilly Jim, by P. G. Wodehouse, my favorite author. I’ve read almost everything Wodehouse ever wrote (and that’s a lot – he was extremely prolific), and I thought I had read this book. 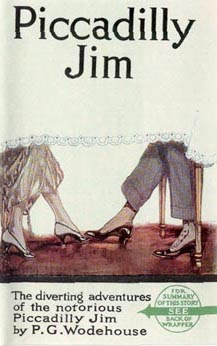 I was wrong – though, in my defense, it's easy to mix up Wodehouse stories. Almost all his stories have similar plotlines: boy and girl are in love (though sometimes one or both don’t know it for a while), some major obstacle is in their path (feuding families, girl’s father disapproves of boy, the girl is on the stage, etc), all is overcome, everyone lives happily ever after.

Along the way, this very simple plotline becomes incredibly complicated, with all sorts of subplots and usually many imposters; in Picadilly Jim, the title character impersonates someone (because the girl hates Jim), and then ends up impersonating himself as the person he’s impersonating (if you follow me), because he's helping the girl kidnap a child (but their intentions are good) while someone impersonating an English nobleman tries to steal a secret formula (Jim knows the guy's an imposter but can't say so because Jim's an imposter too -- except not really).

If these plots sound like every old-time musical you ever saw, that’s probably because Wodehouse had his greatest early success as a writer for Broadway musicals; his collaborations with Guy Bolton and Jerome Kern are considered classics. He later said that his novels and stories were musical comedies without the music.

But the thing that makes these stories great is the language. I honestly believe that, Shakespeare aside, no one has ever mastered the English language to the degree Wodehouse did (and Shakespeare was nowhere near as funny – though maybe I just don’t get his jokes).

Wodehouse clearly loved words, and often used obscure words, or new formulations of words (referring to an unhappy person as “clearly not gruntled”). Wodehouse characters, especially the heroes, are very prone to making high-flying speeches, often using obscure or archaic words. I mentioned one in this post, in which Jim used the word “yestreen”.

Later, Jim is thinking of something he had done several years before (the thing for which the girl hates him), and Wodehouse writes:


He found himself recoiling in disgust from the man he had been, the man who could have done a wanton thing like that without compunction or ruth.

It is the first time I have ever seen “ruth” used. We are all familiar with “ruthless” of course, but I had never seen it minus the “-less”. Though the context makes the meaning fairly clear, the dictionary tells us that it is a noun meaning “compassion or pity”.

(And, yes, there is an entry for “ruthful” too – though it's listed as archaic).

Which – having taken the long way around, gets us to the title. If “pitiless” means harsh and unfeeling, then shouldn’t “pitiful” mean compassionate and caring – instead of meaning an object worthy of pity? Let’s get this fixed, okay?

If you’re interested, by the way, you can read Piccadilly Jim online as it appeared in serial form in the Saturday Evening Post in 1916, or download it for your ereader at Project Gutenberg. I recommend the Post version, because it includes the original illustrations from the magazine
Posted by Bob Houk at 8:55 AM