Nenana is a river town in central Alaska, where it gets really, really cold: the record is -69F. To amuse themselves, I suppose, workers building a railroad there almost a hundred years ago started a betting pool on when the river ice would break up. The pool has continued ever since. Records, back to 1917, of the time of breaking are here -- the earliest date is April 20 (in 1940 and 1998), the latest is May 20 (1964).

As of the time I am writing this (just before 2pm May 20 Philippine time, so late night -- I could look it up, but I'm too lazy -- on May 19 in Alaska) the ice has not broken. Thus, this is already the second-latest breakup of the past ninety-seven years, and in twelve hours or so might be the latest.

This picture was just posted at the official site (they update every thirty seconds) -- looks like it's getting close. 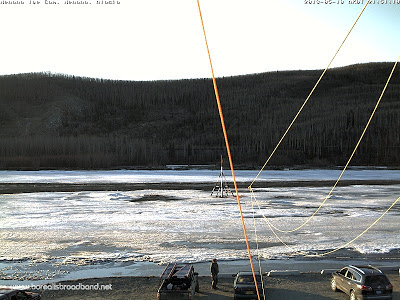 According to a geophysicist at the University of Alaska: "The Nenana Ice Classic is a pretty good proxy for climate change in the 20th century,"

Update: It's past midnight now, and it's still standing, so this is only the second time the ice has made it to May 20. Still questionable whether it will last to 11:41am to set the record. The excitement is building!
Posted by Bob Houk at 1:05 AM