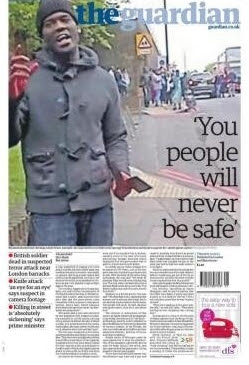 The horror in London is yet another example of how insane is the enemy we face in Islamic extremism.

It's particularly frightening to be facing an enemy that is insane. During the Cold War, there was some comfort in knowing that the leaders of the Soviet Union were rational human beings. But today's enemy, as we have seen so many times, on 9/11, at Fort Hood, in Boston, and today in London, is simply batshit crazy.

The greatest danger we face, though, I think may come from our leaders – the political and media elite – who refuse to admit who and what the enemy is. I quite understand the danger of condemning all Muslims, but the elite have gone overboard in the other direction – e.g., referring to the Fort Hood atrocity as ‘workplace violence’.

We’ll probably hear this termed ‘just another street mugging that went too far.’

I intend to write more about this point, but I think that what Islam needs is a Reformation. Until then, this guy is probably right -- we will never be safe.
Posted by Bob Houk at 2:43 AM