On Jason Collins and Tim Tebow

A couple of events concerning two back-ups has consumed most of the attention of the sports media in the US for the past week or so – Tim Tebow (a back-up quarterback) was released by the New York Jets, and Jason Collins (a back-up center who had recently been released by the Washington Wizards) announced that he is gay.

First things first: I wish them both the best in their future professional and personal lives.

And now, on to the point of this post. Generally, nothing said by a 34yo back-up center gets noticed, but Collins’s announcement was something of a breakthrough, to put it mildly. It’s hardly surprising that it has attracted such attention, and everything he does or says from now on will get similar attention.

The release of a back-up QB will usually get a few media mentions when it happens, but that’s pretty much the end of it -- it’s not a big deal. With Tebow, though, everything is a big deal. Because of his openness about his religious views, because of his wide and rabid fan base (many of them attracted by religion), because of his unusual playing style, he garners media coverage that is far beyond the norm even for a star, much less a role-player.

Which is the problem for both these guys in the next step of their careers (if there is a next step).

Calling Tim Tebow a distraction has become a media cliché. Here’s the headline on a New York Daily News article concerning the comments of a just-retired Jets coach: Mike Westhoff says the NY Jets' handling of Tim Tebow was 'an absolute mess' and 'distraction'

There’s more: googling “Tim Tebow, distraction” got me 573,000 hits. Many of them made the point that coaches and general managers around the league don’t want to sign Tebow because of the distractions he’ll cause.

Of course, if he were a really, really good player, he could be the third Tsarnaev brother and they’d sign him. But he’s not. He’s a very good athlete whose skills as a college quarterback don’t translate well to the pro game. At best, he’s an OK back-up. OK back-ups can’t afford to be a distraction.

Which brings us to Jason Collins. There’s a lot of discussion about whether any team will sign him now, and you can bet that if he isn’t signed, we’ll be told that it’s proof of anti-gay bias in sports. I doubt that, as I doubt that Tebow’s problems are proof of anti-Christian bias in the NFL, as is sometimes charged. (Note that I’m not saying that these biases don’t exist, just that they are not necessarily the reasons why these particular players may not be wanted).

Collins’s chances of being signed were slim before his announcement. Here’s a graph of his minutes played over the course of his career: 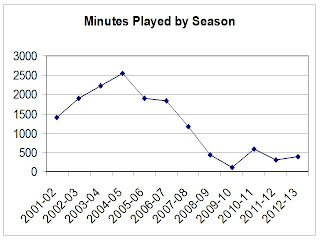 Early in his career, he started games regularly and on average played 25-30 minutes of each of his team’s 82 games. In recent years, it has been more like five minutes. At age thirty-five next year, it seems reasonable to assume that his playing time would further decline. The Washington Wizards, a team with a 29-53 record, thought he wasn’t worth keeping around.

I will repeat about Jason Collins something similar to what I said about Tim Tebow: He is, at best (at this point in his career), an OK back-up. And I’ll repeat another thing: OK back-ups can’t afford to be a distraction.

It’s possible the NBA commissioner may lean on some team to force them to sign Collins in order to avoid bad publicity. Tim Tebow may play in the Arena League or in Canada. But unless that happens, I think we’ve probably seen the last of both these players (in sports).

As an aside: Here’s an article comparing Collins to Jackie Robinson. The problem with the comparison is that Jackie Robinson was a helluva good player.
Posted by Bob Houk at 12:48 AM