According to this article, Body Mass Index (BMI), used by most doctors, may not be all that accurate as a gauge of health. A study found that a much simpler measure, the ratio of your waist to your height (WHR?), bears a much stronger correlation to lifespan.


Measuring the ratio of someone's waist to their height is a better way of predicting their life expectancy than body mass index (BMI), the method widely used by doctors when judging overall health and risk of disease, researchers said.

BMI is calculated as a person's weight in kilograms divided by the square of their height in metres, but a study found that the simpler measurement of waistline against height produced a more accurate prediction of lifespan.

People with the highest waist-to-height ratio, whose waistlines measured 80 per cent of their height, lived 17 years fewer than average.

Keeping your waist circumference to less than half of your height can help prevent the onset of conditions like stroke, heart disease and diabetes and add years to life, researchers said.

For a 6ft man, this would mean having a waistline smaller than 36in, while a 5ft 4in woman should have a waist size no larger than 32in. [ … ]

Researchers from Oxford Brookes University examined data on patients whose BMI and waist to height ratio were measured in the 1980s.

Twenty years later, death rates among the group were much more closely linked to participants' earlier waist-to-height ratio than their BMI, suggesting it is a more useful tool for identifying health risks at an early stage.

A common complaint I’ve heard about BMI is that a muscular person (not me, obviously) will have a higher BMI than the charts say s/he should because muscles weigh more than flab. So working out at the gym can actually raise your BMI, despite the workouts' health benefits.

The article raises another reason why waist size might be a better indicator, though:


Measuring someone's waist is important because it accounts for levels of central fat which accumulates around the organs and is particularly closely linked to [conditions] like stroke and heart disease.

She said: "If you are measuring waist-to-height ratio you are getting a much earlier [prediction] that something is going wrong, and then you can do something about it.

The standard ranges for BMI, which is measured by dividing weight (in kilograms) by the square of height (in meters), are as follows: 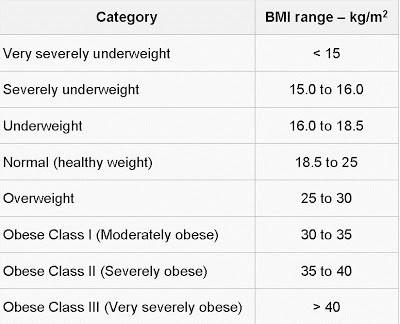 Since anything involving the metric system seems to throw Americans into a tizzy, another advantage of the WHR is that it doesn’t matter which form of measurements you use.

Here’s a chart from Wikipedia with characterizations of various ratios: 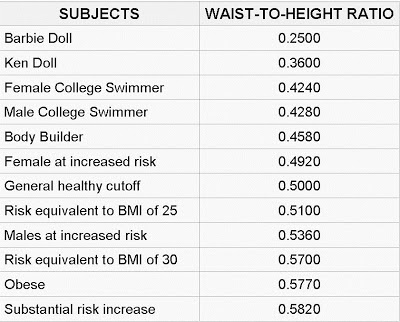 To simplify matters, here are a BMI calculator and a WHR calculator.

Email ThisBlogThis!Share to TwitterShare to FacebookShare to Pinterest
Labels: Health/Fitness