The Malditas Got a Whole Lot Better Very Suddenly

The Philippine women’s soccer team, the Malditas, are playing in the opening round of qualifying for the Asian Cup. Their first opponent, in a game played in Bangladesh yesterday, was Iran, a team ranked thirty spots above the Philippines (Iran was ranked 52, Philippines 82). To defeat a team ranked that far ahead would be considered a fair-sized surprise, but not earth-shattering. The earth was if not shattered at least dented a bit though by the nature of the Philippine victory – the Malditas scored three times in the first four minutes and won 6-0.

Obviously, something remarkable has happened to the Philippine team, and what it seems to be is an infusion of Americans. All five of the Philippine goals (there was also an own goal by Iran) were scored by players recruited from US college teams.

The Philippine team made a trip to a tournament in Los Angeles last fall/winter, and while there held a tryout camp to which they invited a number of Fil-Ams (including Kathleen Houk, who decided not to attend). I don’t know how many of the team members came from that camp, but the team used to have only a few Americans.

But now: I went through the lineup listed in the linked article and ten of the eleven starters and two of the three subs are from US college teams. 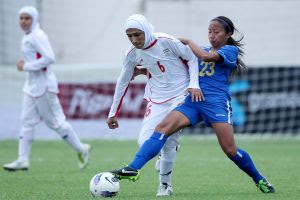 On the downside, it’s unfortunate that the Philippines isn’t producing more home-grown talent, but maybe a few wins will build enough interest here to get more schools playing soccer and more girls playing sports of all kinds.

By the way, here’s a pic from the game. Can you imagine wearing a uniform like the poor Iranian women are forced to wear, while playing ninety minutes in tropical heat and humidity? Even if they got trounced, I salute them for surviving the game.
Posted by Bob Houk at 6:04 AM