Kudos to the Asiana Flight Crew

The plane crash in San Francisco today, tragic as it was, could have been much, much worse. Shortly after the crash the plane burned. Had the crew not evacuated the plane very quickly, many more people would almost certainly have died. 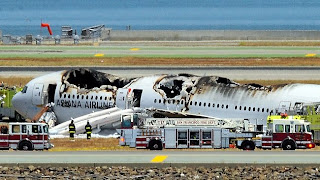 Video from passengers after the crash landing show slides deployed and people exiting well before fire really took hold of the aircraft.

Asiana have confirmed there were 291 passengers plus 16 cabin crew onboard flight OZ214. Looking at video of the burned out wreckage and of smoke and fire soon after the crash, some may be surprised the casualty figures are so low considering there were more than 300 onboard.

This is very reminiscent of an incident in Toronto in August, 2005 when an Air France plane crashed. Although there was a large fire in that crash, all 309 passengers and crew on the Airbus A340 managed to get off. [ … ]

Most of the planes we fly today are designed so passengers can get out within 90 seconds in an emergency. That is what we have seen in the case with this incident in San Francisco.

Contrast the behavior of well-trained flight crews with what happened recently in the Philippines. Just last month in Davao, a Cebu Pacific plane crashed, and the flight crew burst into tears instead of into action.


Passenger Andrew Bautista said he and his wife, who occupied Seats 1E and F, knew something was wrong when the flight crew failed to issue the usual announcements—seatbelts fastened, seats upright and window shades raised. They were just told to prepare for landing.

“And then we were going so fast, that we hit the ground within ten seconds, there was a bump and then the lights went out and there was smoke all over,” Bautista remembers. And the next thing they knew, a flight attendant was crying.

Except for that, the crew was silent, and people began to panic. “The fact was that very little was said on the plane, perhaps out of fear or uncertainty,” said Nelson Lindsay, a New Zealander who was on his 40th trip to Davao.

Five foreigners were on board and begged the flight crew to speak in English for their sake but between the terrified screams, frantic ramblings, and the passengers’ rush to get their carry on baggage from the overhead bins, very few bothered to translate to any of the foreign passengers that day.

Passenger Marlon Bo took it upon himself to calm the passengers and ask them to remain seated as the plane might tilt and bring even more danger to everyone. In the darkness, people prayed and held on to their children and their family, others frantically texted friends and relatives fearing that no one would know what had happened should the plane burst in flames.

Thankfully, there was no fire, or presumably every passenger would have died, since absolutely nothing happened for twenty minutes, until a passenger took charge and organized the plane’s evacuation.

A month later, there has been no further word on anything being done about Cebu Pacific’s failure to train their crew. As I wrote at the time, I expect nothing to happen, because the airline is owned by one of the country’s richest men, and run by his son.
Posted by Bob Houk at 2:57 AM