OK, everybody else is commenting on the Rolling Stone cover, so I might as well join in. Actually, I'll just join in to repeat the best comment I've read, and maybe expand a bit on it. Jim Geraghty, at National Review, wrote "Rolling Stone is like your crazy ex-girlfriend, trying to get you to pay attention to her again." 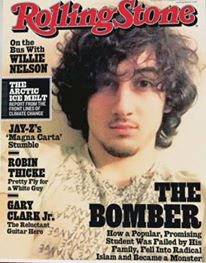 That's not an exact quote, but I don't think he can sue me about it.

Whatever he said, it's true. Rolling Stone was really, really cool, and edgy, and etc ... in the sixties and seventies. It hasn't been relevant in about twenty-five or thirty years, and it faces a particularly nasty problem now -- it is a print publication edited for people who pretty much don't read at all and certainly don't read print.

Thus, this cover, which is pretty much screaming, "Look at me! Look at me, dammit!!"

It will be gone in a few years, and when it ceases publication, hardly anyone will notice.
Posted by Bob Houk at 1:21 AM