I’ve posted several times before about the incompetence of many/most Filipino businesses. Often, as in this most recent example (a case of a guy who can’t get a restaurant to give him a bottle of A-1 Steak Sauce that actually has any steak sauce in it), it’s funny.

But, at other times, the story is far less amusing, as in last week's plane crash in Davao that only through sheer luck did not end in tragedy.

A Cebu Pacific flight from Manila crashed (to be more precise – it skidded off the runway) on landing at Davao. The circumstances tell a lot about how things are done in the Philippines. Here are some passenger comments:


Jacones said the flight crew and the pilots seemed to have been stunned by what had just happened that they failed to immediately attend to the passengers.

“They (cabin crew) apparently lacked crisis management training because they acted so poorly to the situation. A few of us passengers [were] the ones who tried to calm down the rest of the passengers,” he said.

Some 15 minutes later, a pilot came out from the cockpit and addressed the passengers.

“He told us that it was the heavy rain, and that they lost sight of the runway lights,” Jacones said.  [… ]

Passenger Menard Dacono, 26, a Filipino business development manager working in Singapore, said when they reached the airport, not one official from Cebu Pacific faced them.

“No one from the airlines offered an explanation,” Dacono said. 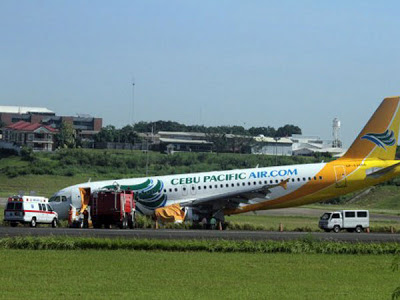 And here's a first person account in timeline form by a passenger. We’ll pick it up immediately after the crash (and I've added emphasis on a couple points):


6:57pm.The scene from inside the cabin was like a scene taken directly from a Hollywood crash movie flick. It was eerily dark with only the emergency exit lights on. We could hear the sound of the rain and wind gushing outside, and the loud cries of babies on board the plane. Nobody talked for a few seconds until my wife shouted “OPEN the doors” then people suddenly broke their silence. The smoke inside the cabin was enough to stir panic among the passengers reeling to get out of the plain. Yet we were instructed by the cabin crew to stay put, as they would wait for further instructions from the captain.

What? Really? You gonna wait for this freakin’ plane to blow while we were still inside? The initial responses from the passengers were a total mayhem. Everyone wants out. People were crying, some were trying to use their mobile phones to contact their loved ones outside, which I just realized could have been disastrous as it could ignite a flame that could blow us all off to the heavens.

1 min, 2mins, 5mins gone by and we are left to ourselves trying to figure out what to do next. Some members of the cabin crew were crying as well as they try their best to calm the passengers down. No ambulance, no fire trucks and no help from outside on the first few minutes of the crash. 23minutes after and with only smoky air to breath, not only oxygen, but patience, was running dangerously low as well.

It took the courage of one person, whom we only know as Captain Bok from the Philippine Navy, to stand up calm everyone down. He knew what he was doing and he was in control when even the cabin crew looked like they were really at a lost on what to do. Capt. Bok gave clear instructions for everyone to sit down so that we can leave row by row to prevent the plane from tilting over. He was the clear definition of a “guiding voice”.

And then after they’re out of the plane:


7:50pm.There were only 2 vehicles that ferried the passengers from the grounds to the terminal. One was a private van most probably owned by somebody working on the premises, and another ambulance. The passengers are left out standing in the rain waiting for a ride. From the moment of impact, it took more than 5 minutes for the fire fighters to reach the scene. There were no medical first responders; in fact there were no one else. I can just imagine what would’ve happened to us if the plane did blow up and there were serious injuries on site. It would have been a mess.

8:10pm.All the passengers are now safe at the baggage conveyor section, eagerly awaiting guidance or any support from the Cebu Pacific management. But lo and behold, again there was no one to face us. Wow, in the movies you could see an outpouring of support for people who have just been to such traumatic experiences. But for us…no food, no warming blankets for those who were dripping wet from the rain, no drinks, no nothing! Not even the sight of the cabin crew consoling passengers. There were even no seats for us to rest our shaking bodies so most people just sat on the conveyor itself. And then I remembered, yes this is not Hollywood.

The incompetence involved here is phenomenal. First, of course, the pilot should not have tried to land if he couldn’t see the runway lights. I was once on a flight when the pilot aborted the landing because of weather conditions – this was in Austin and we were very close to landing when the pilot pulled up and took us to Houston because the cross-winds were too severe. Nobody – not the airline, nor the crew, nor the passengers – likes that decision. But this case tells us why it’s necessary.

Second, the cabin crew appears to have been almost as bad as the pilot. Why in God’s name would it take so long to evacuate the plane? The damned thing might burst into flame at any moment. The pilot takes fifteen minutes before he even talks to the passengers? What the hell was going on in the meantime?

Third, the airport apparently has no idea how to deal with an emergency, either -- slow response by the fire crews, no response by medics (it’s not covered in the quotes above, but there were ill passengers, including a pregnant woman, who could not get medical attention, and medical crews sent from the city were refused entrance to the airport), and no provisions even for transporting passengers from the runway to the terminal (heaven knows they had long enough, given to inexcusable delay in getting the passengers off the plane).

While the pilot and crew should be punished (if what we’re reading is true), and probably will be, the failure to properly train the crew in emergency procedures is totally the fault of the airline’s management.

The airline, however, is owned by John Gokongwei, the third-richest man in the Philippines, and run by his son.

Therefore, here is what will happen: