About Corporate Control of American Politics 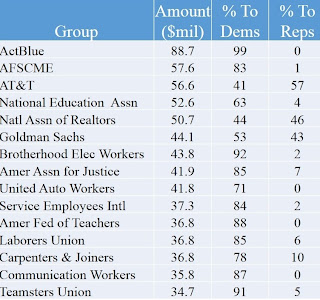 Next time someone starts complaining about corporate influence in politics, you might show them this chart. These are the top fifteen organizations in terms of political contributions for the years 1989-2012. Of the fifteen, two are corporations and one a trade association; ten are unions.

The data is from the Center for Responsive Politics, which based it on FEC filings. The full list is here.

Of the fifteen, only two gave more money to Republicans than Democrats (by relatively narrow margins), with one other also splitting its money fairly evenly. The other twelve are overwhelmingly Democrat.

And the evilest of evils – the National Rifle Association? They’re #52.
Posted by Bob Houk at 1:52 AM