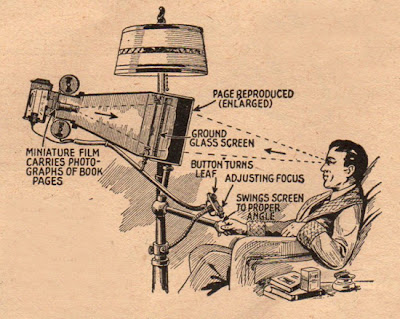 It’s not surprising this didn’t catch on. I doubt many 1935 housewives would have allowed such a monstrosity in their living rooms (or was ‘parlor’ still the correct term in 1935?)

Anyway, it is basically just a microfilm reader (such as we used to find in libraries) mounted on a pole.

The text carries the information that microfilm was patented in 1859, which is much earlier than I would have guessed and that


… New York banker George Lewis McCarthy … developed the first practical use for microfilm in 1925, allowing him to make miniaturized copies of bank documents.

Which reminded me that when I was in college in the late sixties, I worked nights at Valley National Bank (at the time the largest bank in Arizona), and a big part of my job was feeding checks into a microfilm machine. Not very exciting work, and the pay sucked too.
Posted by Bob Houk at 8:57 AM