Update on Ecuador's Trade Status with the US 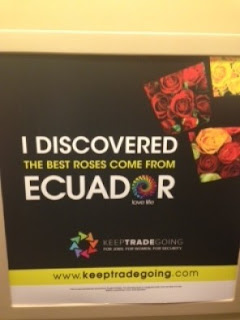 I mentioned yesterday that Ecuador might suffer job losses (and American expats there might suffer hostility) if the US failed to renew Ecuador's trade preferences.

President Correa of Ecuador made a big show of saying Ecuador wouldn't be bullied and renounced the preferences. Ecuador has indicated that the preferences didn't mean much anyway.

That is belied, however, by the fact that the Ecuadorian Embassy in Washington was actually running an ad campaign to get the preferences renewed, according to The Washington Post. Here's an ad currently up on Washington's public transit system.


The initiative also featured an extensive Web site, according to a news release lauding the launch, featuring “videos, infographics, photos and testimonials from those affected in both countries – from Ecuadorian farmers to the owners of U.S. flower shops,” as well as a social-media presence.

The message is (was?) that the trade deal was pretty much the best thing since sliced bread, keeping Ecuadorians from resorting to the drug trade, while sending the very finest fresh-cut roses, tuna, broccoli and mangoes to American consumers.

“KeepTradeGoing.com serves as a forum for educating, encouraging action, and stimulating a very important conversation: ways that Ecuador and the U.S. can further develop our trade relationships for the economic and security benefits of both countries,” Nathalie Cely, the Ecuadorian ambassador to the U.S. said in the release.

The website has been taken down.
Posted by Bob Houk at 10:36 AM