My Mom Lied to Me about Carrots 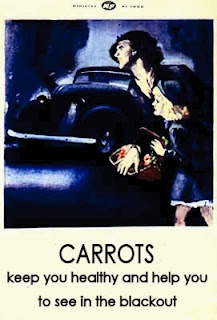 News Flash!: Kids don’t like vegetables. Actually, a lot of adults, me included, are rather tepid on the subject as well.

In order to get kids to eat their veggies, moms tell all sorts of lies (e.g., “Peas taste great!”). A common story in the fifties, when I was a kid, was that carrots are good for our eyes, with a corollary that eating carrots will help with seeing at night. My mom used these stories on me, as I recall. I can’t remember whether I believed her or not; most likely I didn’t care, because it didn’t make the carrots taste any better.

As is often the case with stories of this sort, there’s a little bit of truth in it; carrots contain a lot of vitamin A, which is helpful to our vision. The night vision part of the story, though, is total BS, but it has an interesting story behind it.

During the London Blitz in World War II, the Royal Air Force had a secret weapon – radar. The help of radar enabled RAF pilots to shoot down a substantial number of attacking German bombers during the night-time raids. In fact, they shot down so many that the Germans got suspicious and began trying to find out what was behind the British success.

Fearful that the Germans might find out about radar and possibly develop their own version, the Brits came up with an alternative story – their pilots were eating carrots in order to improve their night vision.

To fool the Germans with this bit of hokum, the Brits had to act like they believed it themselves, so they began putting out posters urging people to eat carrots in order to see better during the blackouts. This served two purposes, it misled the Germans and it helped ease wartime food shortages by increasing the consumption of carrots, of which they had plenty.

By the way, much of this stuff is covered at (get ready for it) The World Carrot Museum.
Posted by Bob Houk at 2:54 AM