Kate Hepburn Gets a Starring Role in My Family Tree 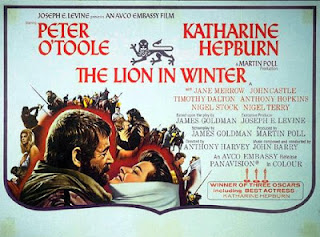 I’m continuing onward with my genealogical research. I have come up with a number of kings and queens (if you go back far enough, that’s pretty much inevitable, I guess), but you really know you've hit the big time when you come up with somebody who was important enough to be played by Katherine Hepburn.

Eleanor of Aquitaine was my great x24 grandmother, and The Lion in Winter provides a highly romanticized version of her very difficult marriage with Henry II of England (as portrayed by Peter O’Toole) and their even more difficult relationships with their sons.

Eleanor is most noted (other than for providing Hepburn with one of her four Oscar-winning roles) for having been the Queen of both France and England – she was married to Louis VII of France before marrying Henry (she and Louis went on the Second Crusade together).

It’s interesting to note that the marriage to Louis was annulled by the Pope on grounds of consanguinity, but she then married Henry, to whom she was more closely related than to Louis. This is one of those things that make you go “Hmmm”.

Something new I learned was the origin of the name Eleanor. She was named for her mother, Aenor, and was referred to as a child as ‘alia Aenor’ – Latin for ‘the other Aenor’. In English, this became Eleanor.
Posted by Bob Houk at 7:00 AM