Isabella is my great x23 grandmother, and was Queen of England as King John's wife from 1200 to John's death in 1216. Wikipedia says of her:


"At the time of her marriage to John, the blonde and blue-eyed 12-year-old Isabella was already renowned for her beauty and has sometimes been called the Helen of the Middle Ages by historians." 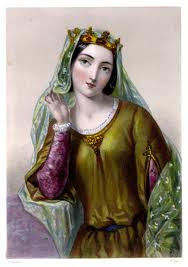 Yeah, she was twelve -- got a problem with that?
This is at least the third time one of my female ancestors has been described as the most beautiful woman of her times (although Isabella is supposed to be the tops for the whole era). This no doubt accounts for my good looks. Too bad about the rest of my family.
The pic indicates that she was pretty hot (if I may speak thus about a great-grandma). I wonder about the pic, though, because she's definitely not a blonde.

John had his previous marriage annulled in order to marry Isabella, who was already betrothed to another French nobleman, which set off a war with France, thus the Helen comparison.

John's first wife, Isabel FitzRobert, Countess of Gloucester, was his second cousin (both were descended from King Henry I, she through one of Henry's bastards illegitimate offspring what's the proper term these days?), so they needed a papal dispensation to marry. They got the dispensation, but the pope said that, while they could marry, they were not allowed to have sex (!). I presume they ignored this provision of the ruling, but there were no children, so maybe not. John later used the consanguinity as the basis for his annulment.

Isabella, by the way, after John's death, went back to France, where she married the son of the nobleman to whom she had been betrothed originally.
Posted by Bob Houk at 7:55 AM