It's raining at the moment -- really, really hard. Not a big piece of news -- it rains often, which is perhaps why they call this 'the rainy season' (though I wouldn't want to jump to conclusions). It often rains hard, too. What it doesn't do is rain long. 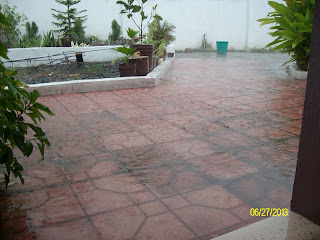 In Chicago (and in Phoenix, San Francisco, LA, Austin, and other places where I've lived or spent substantial amounts of time) there are occasions when a rain lasts only a short time, of course. But as often as not, it seems, if it rains, it rains for several hours, or perhaps all day. I cannot recall it ever raining all day here, and don't think it has often rained for more than an hour or so. After which, it will be even more muggy than before.

None of this is very important or insightful, I agree. Just something I was thinking about.

I'm not sure what this pic (it's looking out the front door of my apartment) is supposed to prove. If you enlarge it and look closely, you can probably see the raindrops making ripples, which shows that it is indeed raining. Alternatively, you can take my word for it.

Update: It stopped after about an hour.
Posted by Bob Houk at 2:24 AM

Email ThisBlogThis!Share to TwitterShare to FacebookShare to Pinterest
Labels: Weather