I was reading a favorite blog about mystery books (The Passing Tramp) the other day, when an author I’ve read a few times came up in regard to a delicate subject. The author is Leslie Ford (real name: Zenith Brown), and the subject is race – specifically, negative depictions of racial minorities (blacks, in this case) in books from another era.

The Tramp points out that at least one publishing firm specializing in reprints of Golden Age mysteries refuses to touch Ford’s books:


There are those like Leslie Ford, whose ubiquitous and unconscious racism automatically eliminates her from our consideration [for republishing], customer requests notwithstanding.-- Tom Schantz and the late Enid Schantz of Rue Morgue Press 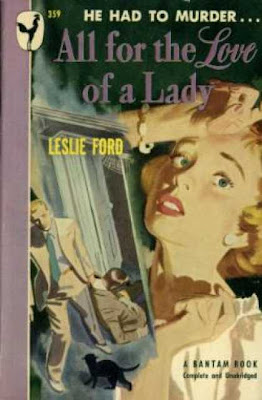 It was set in Washington (as were many Ford books, apparently) during World War Two. I remember enjoying immensely the insights into the thought processes and practices of the era – victory gardens, trading ration stamps, upper-class people discussing the adventure of riding buses, etc. As a mystery, I recall it as mediocre. As the title might indicate, it was almost as much a romance novel as a mystery, with much of the attention focused on saving the marriage of the couple at the center of the mystery.

But we are here today to discuss race. Ford’s characters are upper-class Washingtonians – all have servants, the servants are black, and the depictions of them, while not nasty or excessively negative, are very patronizing and condescending. Reading the passages of conversations between the central characters and their cooks and maids had me shaking my head in dismay on a number of occasions.

And yet – the book is a product of its time. As nearly as I can determine, using other books and movies as my guide, as well as memories of my own childhood ten or fifteen years later, the depictions by Ford of white attitudes are accurate. I wouldn’t want it any other way.

And if the author shared the attitudes of her characters (as it seems likely she did)? Then shame on her. She was hardly alone, but as the Tramp points out, some people were already beginning to call for change.


Look at the uproar in 1939 over the refusal by the Daughters of the American Revolution to allow Marian Anderson to sing at Constitution Hall.  First Lady Elanor Roosevelt resigned her D. A. R. membership over this shameful exclusion.

But I don’t see why that means her books should not be reprinted, read, or enjoyed. There are a great many authors and artists whose private lives or political/social views one might find offensive. Ezra Pound was a fascist, and a damned fine poet. I don’t let Wagner’s anti-Semitism get in the way of my enjoyment of his music.

But, as an artist, Leslie Ford is not in the same category as Pound and Wagner. Her books are, the little I have read, enjoyable, but nothing great. If she ends up forgotten, it will be unfair, but there are so many other good mystery writers of that era that the loss will not cause me any sleepless nights.

Still, if I come across any of her books in used book stores, I will snap them up, and will read and enjoy them without an ounce of guilt.
Posted by Bob Houk at 9:19 AM