I had a great time at the wedding reception (the posts about the wedding are here and here) last Saturday night (yeah, I know I’m running way behind – what’s new?). For the benefit of American readers, I’ll focus on the things that are different from an American reception.

The things that are the same: Lots of good food (though different sorts of food, of course), speeches and toasts, intros of family, watching the bridal couple dance. Also, games with the garter and bouquet (though the games differed a bit), and cutting the wedding cake.

Different: They didn’t do the bit of the bride dancing with her father and the groom cutting in. Also very different, there was no dancing after dinner and the whole thing was over by about 10pm. That was fine with me, of course, because I‘m an old fart and I had a fairly early plane back to Cebu on Sunday, and I was dreading being there until well after midnight as at a typical American reception; but it was a bit of a surprise to me. It may fit in with my previous mention that Zambo seems to not be a late-night town.

They also had videos about the bridal couple. It’s been a few years since my last American wedding, so maybe that has become a feature there, too.

There was excellent entertainment. There was a live band that was quite good, doing a couple of long sets. I apologize for not getting a better picture of the girl singing, since she was quite nice looking, but from where I was sitting the podium was in the way. 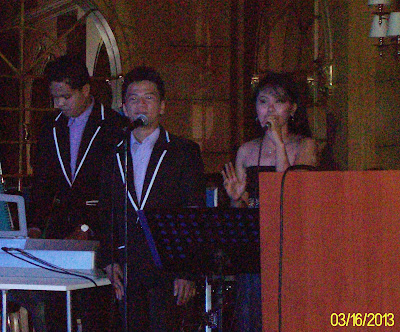 They also brought in a dance troupe. They were really good, but I was rather surprised by the number they performed. It was “Cell Block Tango” (aka, “He Had It Coming”) from Chicago. I really like this song, and the dancers were excellent, but the song (for those not familiar with it) is about killing an unfaithful husband, which seemed a bit inappropriate for the occasion.

Not that I’m complaining. I like stuff from musical theatre, and if it has pretty girls in sexy costumes -- so much the better.

Here are Lorna and I with the bride and groom. I'm the guy in the yellow shirt, for any of those who have forgotten what I look like. 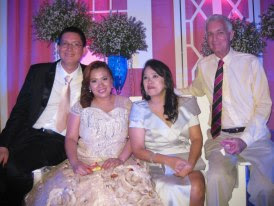