My niece Jossah posted this picture of the sign outside a restaurant in Zamboanga City where she had eaten.

It immediately rang all sorts of bells for me because of the similarity of the character pictured to Big Boy -- the fat kid whose statue was a landmark for Phoenix teenagers at the corner of Central and Thomas, outside Bob's Big Boy restaurant.

For comparison purposes, here are the two side-by-side: 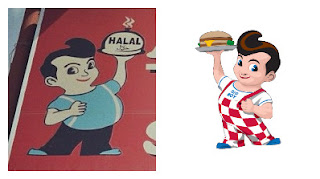 Satti, by the way, is a food-on-a-stick thing (similar to satay in Indonesia, Malaysia, and Thailand) that is very popular in Zamboanga (which isn't far from Malaysia and Indonesia). Notice that what Andy is holding instead of a hamburger is labeled 'Halal', which means it's fit for Muslims to eat, an important marketing point in Zambo.

I doubt that the many burgers I had at Big Boy were halal, but I would love to have one right now. Writing this made me hungry.
Posted by Bob Houk at 11:56 PM