… but unfortunately basketball doesn’t love them back.

There is a backboard set up in the street just outside the gate of my apartment, and in virtually every neighborhood in the country, and there are usually a few boys or young men playing (never any girls – I’ve mentioned before that most Filipinas are not into sports, as participants at least). Timeout is called to let cars pass. Here are a couple kids playing in front of my place. 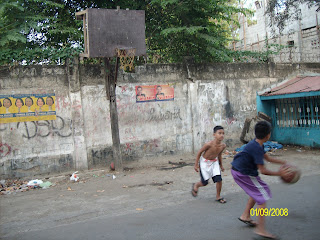 Ever since my first introduction to the Philippines more than thirty years ago, I have wondered why Filipinos have adopted basketball, of all sports, as their favorite. More than any other sport I can think of, it demands the thing that Filipinos most notably lack – height.

(In the US, she adopted the Bulls; she was not terribly happy about our move from Austin to Chicago, but the prospect of being able to see more Bulls games on TV was a point in favor. Even today, a decade after he retired, I find that mention of Chicago to a Filipino usually brings a response referencing Michael Jordan.)

But however good some Filipino players might be, they’ll never overcome their lack of height – the average height for an adult male in the Philippines is 163cm -- about 5’4” or so and about six inches less than American males (as I mentioned in a post a few days ago). Despite their passion for the sport, the Philippines has never made an impact at the Olympics (I don’t think they’ve ever medaled).

In every team sport that I know of, all else being equal, big players have an advantage (as we are told in Ecclesiastes 9:11: “The race is not always to the swift, nor the battle to the strong, but that’s how the smart money bets.” Or something like that).

Soccer gives a better chance than most sports to a smaller player (assuming he/she can compensate with speed), but the sport has been far less popular here than in most Asian countries. But it’s good to see some small signs that it is belatedly gaining a foothold here.

In November, the Philippines (the team is called the Azkals -- the local term for street dogs) played Singapore here in Cebu (Azkals won) and there was a decent crowd -- enough at least to fill Cebu's tiny stadium. While at the game I bought a team t-shirt. When I flew from Manila to Cebu a couple weeks ago, I wore that t-shirt and in passing through the Manila terminal, three different people commented on the shirt – with the guard at the security line engaging me in a conversation about the team. So maybe there’s some hope.
Posted by Bob Houk at 7:43 AM