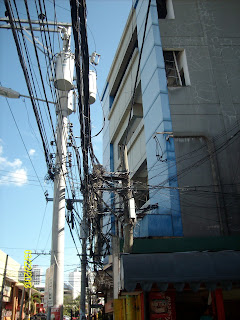 If you want to save some time, you can skip the rest of this post, because the headline says it all. The rest is just examples.

Pretty much every bit of infrastructure that Americans take for granted – roads, sidewalks, internet, electricity, telephones, etc – is in the Philippines either inadequate, shoddily made, poorly maintained, or all of the above. Herewith a few examples.

No electrical or telephone wires are buried – all are strung from pole to pole as they were in the US when I was a kid. At the left is what it looks like on the major street running near my home.

You’ll also enjoy seeing how these wires are worked on. Below, these guys are adding a new strand to the ridiculous mess that already exists. 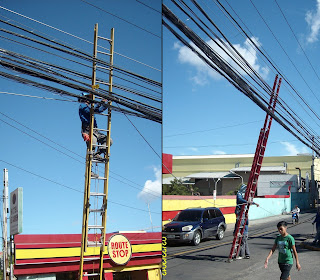 As you can imagine, having all these wires above ground contributes to the frequency of power outages. Given that we are in a typhoon-prone location, the consequences of a typhoon (or any good-sized storm) are magnified by the power outages that result, and recovery from a storm will take longer because there will be no power for a considerable length of time.

Even aside from lines going down, power supplies in many areas are inadequate (when I was in Zamboanga a couple weeks ago, the power went out six to eight times a day and the city had turned off almost all street lights to conserve power) and very expensive (my electricity bill this month was 4070 pesos -- $100 -- for a small one-bedroom apartment (about 550-600 square feet).

Internet is unreliable and very, very slow when it is working. I recommend to people who need internet (e.g., for work) that they have two providers in order to have a back-up. I have a wired DSL that occasionally gets me as much as 2mbps (for comparative purposes, my cable service in Chicago was 12-15mbps), but is usually under 1mbps. It goes out at least once a week (never any explanation), sometimes all day. When it goes out I use my USB plug-in wifi. The last time I had to use this, a couple days ago, the speed was 0.3mbps.

Traffic is a monumental mess. Cebu City, the second biggest metro area in the Philippines, with a population of 2.5 million, has no freeways and no mass transit system. Ponder that for a moment. What do you think it is like to try to get around in a city of two and a half million people that has no mass transit and no freeways?

And it’s actually worse than that, because the whole island is as densely populated as most American metros, and traffic is horrible even outside the city.

Here’s some perspective. The province of Cebu (basically the island, plus a few small neighboring islands) has a population of 4.2 million in a land area of 2200 square miles. Metro Chicago has over double the population (9.7 mil), but covers a land area more than five times larger (10,856 square miles). So the entire province is more than twice as densely populated as one of America’s biggest metros.

The effect is that moving about is very difficult. As an example, last month when Kathleen and Jeff were here, we decided to go swimming with the whale sharks in Oslob, a town at the south end of the island, a bit under sixty miles from Cebu City. Getting there and back took three hours each way. Sixty miles took three hours because the entire trip was through populated areas, with houses and businesses on the edges of the narrow two-lane road and all sorts of vehicles – motorized and not – sharing that road.

Manila, with a population of over twenty million, has even worse traffic. Although it does have a rudimentary mass transit system and a few miles of freeway, these are totally inadequate to deal with the enormous population.

What roads there are generally are poorly maintained. A tunnel project built in Cebu a few years ago has begun to leak, so the city had a structural engineer take a look at it. The part of the article I found most interesting was this sentence:

“Maintenance should be considered on a regular basis,” said his report to Mayor Michael Rama.

Can you imagine how bad things are, that he even needed to make such a suggestion? Shouldn't the need for maintenance be assumed? But practically nothing is maintained here. And when things inevitably break down, they aren’t fixed.

Here’s an example that has particular meaning to me, a bit of broken sidewalk that I stepped into, and damn near broke my leg, a few days after arriving here. 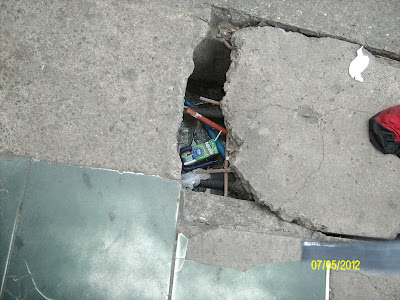 After this I learned that one always watches where one steps, and should never assume anything. I recently walked by that spot, and nine months later, it hasn’t been repaired. It probably never will be.

There often are no sidewalks, even on busy streets – or businesses build on what used to be sidewalk, or squatters are living there. So people frequently have to walk on the street, contributing to the traffic snarl.

Given these problems, you can understand, I’m sure, why few international companies are interested in investing here. The Philippines lags far behind other countries in the region in attracting foreign investment.
Posted by Bob Houk at 12:07 PM