This is Baseline, the gym I belong to. It’s pretty basic, as you can see – open-air because there is no air conditioning. You'll note it's mostly weights -- Filipinos seem to be much more into strength training than cardio-vascular; none of the gyms I've seen that cater to locals have much cardio equipment – this one has two stationary bikes and two manual treadmills (the treads are on rollers). That’s it – everything else is weights. 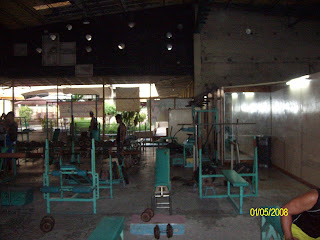 I should mention that the workout areas for men and women are separate. The pictures are of the men’s area – the women’s is smaller, but about equally equipped given the very small number of women I’ve seen using it. In fact, there usually is nobody there -- Filipinas (mostly) don't seem to be into fitness or sports.

Email ThisBlogThis!Share to TwitterShare to FacebookShare to Pinterest
Labels: Health/Fitness