I mentioned in the Coke post a couple days ago that I buy my Cokes at the sari-sari store. It occurs to me that some folks reading this blog may not know what a sari-sari is, so herewith a short explanation. As nearly as it can be defined in American terms, a sari-sari is a micro-convenience store. They sell a very limited range of goods to a very small community of customers. Here are pictures of my neighborhood sari-sari, which is part of the squatter community on my street (squatters are a subject for another post). 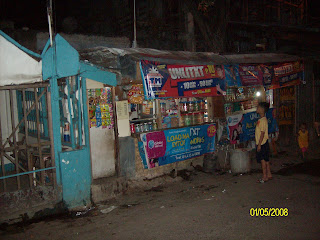 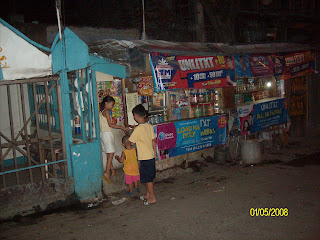 Although you see a child inside the door in one of the pics, customers mostly don't go inside, they are served at the front counter. The store is very small, with just room for the lady who runs it to sit down between customers. It has a refrigerator for the soft drinks and beer and shelves for the other items -- mostly candy and snacks. I bought sugar once when I ran out -- it's sold in tiny packets, just enough for a few pots of tea, but that was enough to tide me over. They also sell packets of instant coffee already mixed with creamer and sugar (called 3-in-1).

They sell cigarettes individually, and provide a lighter that is tied to the counter. Their biggest business is advertised on the sign -- they sell load for prepaid cell phones (practically everybody here is on a prepay plan).

Gloria (my late wife) told me that when she was a teenager and in her early twenties, her family ran a sari-sari out of their house in Manila, and that running the store was her after-school job.
Posted by Bob Houk at 6:12 AM

Email ThisBlogThis!Share to TwitterShare to FacebookShare to Pinterest
Labels: Shopping