As this BBC item posits, Edgar Wallace is not all that much  remembered today, though one of his creations, King Kong, certainly is. This is surprising, since it's estimated that one-quarter of all the books read in the UK in the 1920s were by Wallace. The link (I haven't listened to the audio, not being prepared to devote three hours) argues that perhaps Wallace simply produced too much material. I can't argue the point, having read only a handful of Wallace's output, but most of it I enjoyed. Wikipedia tells us:

So there's no doubt that Wallace could grind 'em out. Nor that he had a knack for grinding out stuff people of his time really, really liked. People of today, not so much, other than a few weirdos like me.

But enough background and generalities. This is about one particular Wallace book – Angel Esquire. The book was published in 1908, one of Wallace's earlier novels.

I downloaded the book (here) after reading this review last year (but just got around to reading the book):


Christopher Angel, an eccentric Scotland Yard detective, will remind you of Albert Campion in his early, silly-ass days, but he is often genuinely amusing, as well as resourceful: “Great fellow for putting things right … if you’re in a mess of any kind, Angel’s the chap to pull you out.”

When he’s not working on a case, he sits at his desk working on a racing form, and he is not perturbed at all when the police commissioner comes into his office and finds him so occupied. Angel is the perfect sleuth for a far-fetched mystery involving master criminals, English gangsters, and an intricate puzzle that must be solved before the rightful heirs can receive several million pounds.

As the reviewer says, the plot is 'far-fetched'; but I will attempt a summary: A crooked gambler
(retired, but still crooked) leaves an estate of two million pounds; instead of designating a recipient, he names three people – two he had worked with and a young woman, Kathleen Kent, who is the daughter of a man who had been financially ruined at his casino. Considering that there were probably lots of people who had lost their fortunes in the same manner, why her? Presumably because we need a beautiful young woman in the story. In case you were wondering if she was beautiful, see at right Hollywood's conception of her in a 1919 film version of the story.

The fortune, though, is not to be divided among these three. The gambler loved puzzles of various types, and left behind a will that included a short rhyme/word puzzle. The first one to solve the puzzle, the solution being the combination to the gambler's elaborate safe, would get all the money.

One of the male legatees, Jimmy (just Jimmy), declines his rights in favor of the damsel. It turns out that he is not in fact a crook, but an aristocrat (a baronet – Sir James Something) who played at crime for the amusement it brought and never really stole anything, or always gave it back, or something (the 'gentleman crook' was a popular figure in thrillers of this time – Raffles being the best remembered today).

The other, Conners, is a genuine bad guy, who is part of a gang called the Borough Lot, who seem to spend most of their time hanging out in their clubhouse discussing what badasses they are and getting captured and let go for no good reason that I can discern. 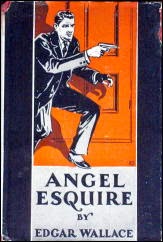 Jimmy and Angel, meanwhile, team up on behalf of the damsel and take turns outdoing each other in displays of sang-froid , with many arch and wry comments as assorted bad guys are holding guns on them..

I described Conners as a bad guy, but he's not the main villain of the story. If you haven't picked out the really bad guy by roughly the mid-point of the story, though, you're not trying. It's not a spoiler, I trust, to let you know that the girl ends up with the money, Jimmy ends up with the girl, and Angel is being arch and wry right up to the final paragraph.

It's a very good book for the limited audience of folks like me who dig this stuff. It's not really a mystery story, which is my usual favorite genre, it's more of a romantic thriller with some improbable crime elements thrown in.

For those who demand what they think of as 'realism' in their reading – steer clear, this is most definitely not you cup of … er, rotgut whiskey. I much prefer, for the most part, escapism, and Angel Esquire is not a bad escape.
Posted by Bob Houk at 11:17 PM

Email ThisBlogThis!Share to TwitterShare to FacebookShare to Pinterest
Labels: Books