The governor of Arizona has submitted his proposed budget, which includes, among other things, cuts in the amount of funding the state provides to state universities. 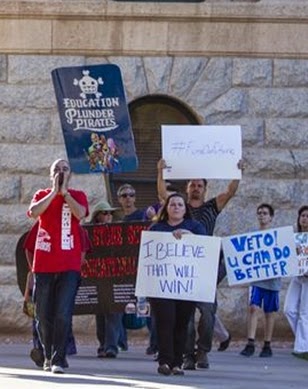 This of course is controversial and you will not be surprised to learn that there have been demonstrations, populated heavily by university students, at the State Capitol complex.

Having been mostly out of the state for the past 20+ years and only recently returned, I don't feel fully up to speed on complex state issues, so I'll avoid for the moment taking sides on this one.

However, I came across this picture (via Espressopundit) of a group of protesters with signs. You will note the young woman in the front with a sign saying, "I believe that will win".

There are a couple of possibilities here. Perhaps the 'that' that she believes will win is someone or something lurking nearby. Or, alternatively, she meant to say "I believe that we'll win".

If if is the latter, then I'm not sure whether the sign is a stronger argument than she thinks in favor of increased funding, or perhaps (assuming that she is an ASU student) an argument for tougher admission standards.