What's Wrong with This Picture? 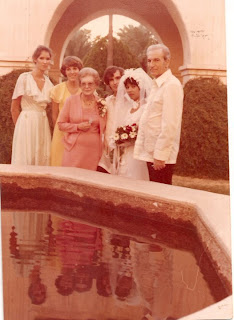 Answer: There's nothing wrong with it (other than my absurd hair), because it was taken on September 27, 1980 in the courtyard of Brophy Chapel in Phoenix, Arizona.

However, had it been taken at the same spot twenty years previous, it would have been a picture of a felony in progress, since the bride and groom were of different races. Arizona (like a great many states) had an anti-miscegenation law, which was repealed in 1962.

An interesting sidelight is that, according to a note on this Wikipedia page, "As interpreted by the Supreme Court of Arizona in State v. Pass, 59 Ariz. 16, 121 P.2d 882 (1942), the law prohibited persons of mixed racial heritage from marrying anyone." Now that's a hard-nosed law.
Posted by Bob Houk at 12:08 PM