Vending machines like this are common sights on Filipino streets. This one is almost directly across the street from the front gate of my apartment compound and serves the small squatter community there. 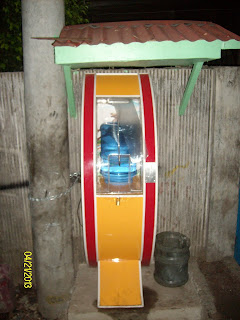 It’s a water dispenser. Inside is a five-gallon water jug and for a peso the machine pours out a small amount of water into a bottle (or, sometimes, a plastic baggie) that you hold under the nozzle. Here’s someone using a dispenser on a street in the Colon district. 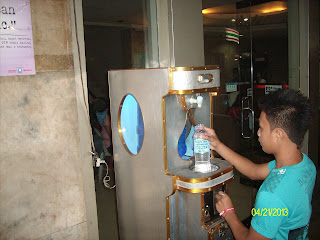 Many Filipinos (especially squatters) have no running water in their homes – I often see mothers washing small children in the street using a bucket of water and a pot to pour water over the kids’ heads to rinse them (sometimes men wash in the street too, though they will do so wearing their shorts). Just yesterday I saw a woman washing her hair by the side of the road, but that’s less common.

Even if they do have running water, people still try not to drink anything from the tap, since it is full of bacteria.

Better-off people use bottled water or have filters installed at home. My in-laws in Manila have a filtering device attached to their kitchen sink. I buy five-gallon jugs for thirty pesos, delivered to our compound; which means, of course, that I’m paying far less for my water than someone who buys from the dispenser or buys smaller quantities from the convenience stores or sari-saris.

I use bottled water only for drinking, but some expats use it for brushing their teeth (a few even wash their dishes in it).
Posted by Bob Houk at 4:16 AM