The Philippine Basketball Association allows each team to have a limited number (I think it’s two, but I’m not sure) of ‘imports’ – players from other countries (usually the US, of course). Given that Filipinos are generally height-challenged, I imagine that this creates some strange match-ups on occasion.

The players from the US are of course not top stars – they are NBA rejects, and I would imagine they are European rejects as well, since I suppose the European leagues would pay more and therefore get first pick of the NBA’s leftovers.

No doubt some are simply not talented enough to make it at higher levels, but one wonders how many of them were passed over because they are discipline problems or drama queens. I say that because of three cases that have been made public in the past few weeks.

Renaldo Balkman
This guy was a first-round pick in the NBA draft a few years ago (though a lot of people, even at the time, thought the Knicks had lost their minds). He was pretty much a bust – in his rookie year he played fifteen minutes a game, and it was all downhill from there. But he did manage to stick around for six seasons, which ain't bad.

But then he came to the Philippines, where he had an epic meltdown in a tournament championship game on March 8. He thought he was fouled, argued with the ref, shoved the ref, then ended up fighting with his teammates who were trying to calm him down, and ended up strangling one of the teammates.

Balkman has been banned from the league.

Walter Sharpe
Sharpe played one season for Detroit after a semi-distinguished college career, most notable for being declared academically ineligible by two colleges. He then bounced around several Developmental League teams, before heading to China for a season, and then here.

Of the three, this is the most boring – all Sharpe did was fall asleep in the parking lot of a Manila bar/restaurant, a few days after Balkman's tantrum and somebody took a picture and tweeted it everywhere. One's first impulse, considering where it happened, is to say he was likely drunk, but narcolepsy may be involved. The team says they don’t want him back.

This guy I maybe feel sorry for -- possibly he just had a very public relapse of a medical condition, unfortunately timed right after an embarrassingly bad on-court performance, and right after Balkman had raised the profile of 'bad boy' imports.

Jamelle Cornley
I’m going in chronological order, but that allows me to save the best for last. Cornley played for Penn State (I’ll bet they’re happy his behavior here won’t get much notice in the US, since they certainly don’t need this kind of publicity for their athletic programs these days). He was drafted in the third round by the NBA Developmental League in 2009, but I can’t find out if he ever played professionally in the US. He had played in France, Israel, and Argentina before coming here, and apparently he played pretty well here.
But then, things went south on him. On Saturday, after a pleasant evening out, he met three ladies on the street and invited them back to his hotel room to become better acquainted. When the ladies left, Cornley discovered that his money was gone, too.

Suspecting that perhaps the departure of the ladies and the simultaneous disappearance of his money was not a mere coincidence, Cornley demanded that the hotel find the ladies and his money. To which the desk clerks replied, ‘Tough luck, sucker’ (okay, they were probably more polite than that), but anyway, he went on a rampage in the lobby, breaking a number of items. The cops were called, he punched one of them out, and now he’s in jail.

But wait – it gets better, in case you were thinking that maybe this guy is just run-of-the-mill dumb, but not really, really stupid.

Apparently this is not his first instance of such behavior. According to this article, his fiancée recently broke up with him over this sort of stuff (or something similar). Here’s the fiancée, whose name is Julianna Palermo: 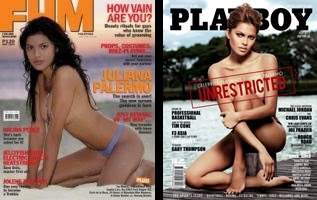 If you are ever looking for a definition of the term ‘world-class stupid’, it is a guy who will give up that for street hookers.

Update: I treated the Cornley case with a fairly light attitude, which I felt it deserved. But this article says that the cop he punched is in critical condition. That makes it a whole lot less funny.
Posted by Bob Houk at 4:00 AM