I haven’t posted for a few days because I was down in Moalboal finishing up my scuba certification.

I went originally about two months ago and did part of it, but bad weather prevented me from taking enough dives to complete the course. And you would be quite correct in assuming that I need as much training as I can get. The guy training me, a German named Klemens, was easy-going and very patient, and he needed all his patience to deal with my ineptitude.

But anyway, I finished off my remaining two dives without making a further fool of myself (it is great fun, and I plan on doing a lot more diving while I’m here, and in whatever place I land in next), and passed the final exam. You may not believe it, but there is some serious math involved in the final, e.g.:

A chart, and a 36-page instruction book on how to read it (no, I’m not kidding) is provided. The reason for this is to avoid a build-up of nitrogen in the bloodstream.

I had some pictures, but managed to lose them off my camera (speaking of ineptitude), so you’ll just have to believe me on this one. Though I can prove that I was in Moalboal – here’s a pic of the bustling downtown area: 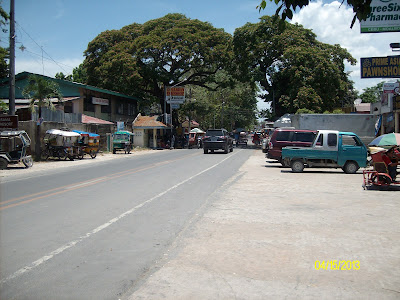 And here’s the Moalboal bus depot, which is, as you can see, a parking lot in front of some small stores (but it does have a couple trees, which are always welcome here): 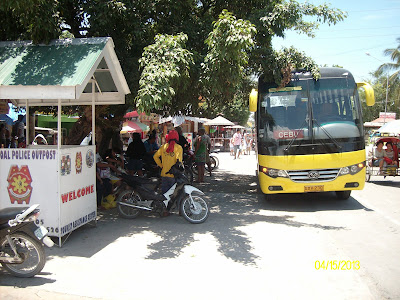 I also finally learned how to pronounce Moalboal. My mistake has been treating it as four syllables, but it is really two, with a slight emphasis on the first: MWAL-bwal. So now you know, just in case it pops up in conversation sometime soon.
Posted by Bob Houk at 3:38 AM

Email ThisBlogThis!Share to TwitterShare to FacebookShare to Pinterest
Labels: Outdoor activities, Philippine travel, Sports, Things I Like in the Philippines