Swimming with the Sharks

Back in February, I went down to Oslob (southern part of Cebu) with Kathleen and Jeff to do some whale shark watching. Lots of fun. If you ever get a chance to do this, here or in some of the other places where it’s available, I recommend it (with a few cautions).

The event involved a driver picking us up in Cebu at 7am and taking us down to Tan-Awan in Oslob. There we were served a decent breakfast (a mango and sticky rice). Then we were given life jackets, swim fins, and snorkel equipment and taken to a boat.

Not the most flattering outfit Kathleen has ever worn: 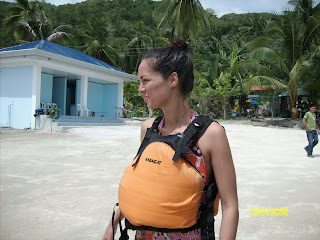 The boat took us about100 meters off-shore where there were numerous other boats. Jeff getting into the boat: 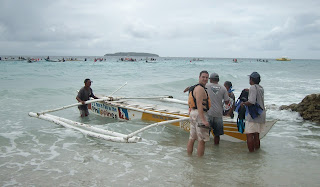 Off to see the sharks:

We couldn’t get any pictures once we were in the boats, because the cameras would have gotten soaked, so I’m going to intersperse a few stock pics along with our own.

A few locals were feeding the whale sharks, who of course were tagging alongside their food source. The boats with tourists aboard were getting close to these sharks. Here’s the feeding process: 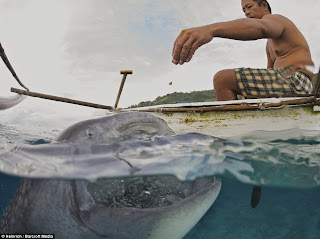 We got in the water, and our guides/rowers advised us to stay within the outriggers rather than swim free, because there was a strong current. We did as told.

We had been told that touching the sharks was forbidden (as is reasonable) , but we were quite close (easily within reach) on several occasions and they touched me at least twice -- once with a fin, once with a tail.

They are huge creatures -- I read they are five to seven meters, but a couple seemed even bigger than that. Here’s one: 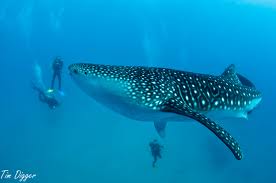 And here’s a view of the business end of a shark:

These are, however, of the Not-People-Eating variety of shark, for which I am grateful.

We were out there about 30-45 minutes, and then we taken to Tumalog waterfall, which is just a few km away, plus a walk of about 400 meters or so, down a fairly steep incline. The falls are incredibly beautiful (reminiscent of Pagsanjan). We showered away the brine under the falls and took a lot of pictures. I wish I were a better photographer, so I could do them justice. Kathleen took some pics, so maybe she’ll send them to me and I’ll post them. 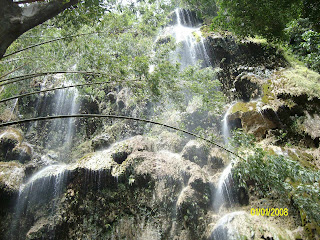 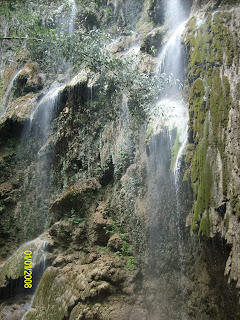 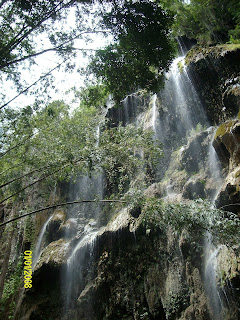 Here’s Kathleen taking a shower (I'll bet that's a sentence you never expected to see on my blog): 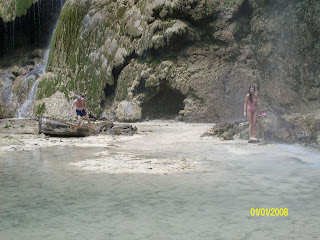 And me returning from mine: 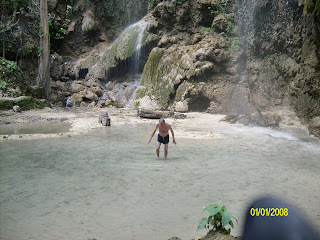 Then we were taken back to the beach where we were served lunch -- pretty good rice, chicken adobo, pork, a fish, and a good soup. Then we bought some tourist crap (yes, I bought a t-shirt that says "I swam with the sharks"), watched the waves for a bit, and then returned to Cebu City.

Negative: Oslob is about 100-120km south of Cebu City, which in a country with decent roads would mean a trip of about 1.5 hrs or so, but here it takes about three hours each way. We were at the beach, on the boat, at the waterfall, and eating for about 3.5 hours. We were in the car for six hours.

It might make more sense to go to Oslob for diving or other activities, with the whale shark watching as an add-on, than to make it a special trip as we did. I don't know what that would cost, but the transport must have been a significant portion of our fee.

Another Negative: Our driver was insane, even by Philippine standards, and despite our complaints he wouldn’t slow down or stop passing on blind curves. We were terrified the whole way (it’s scary to see a bus coming at you on a very narrow road). We tipped the boatmen and the cook, but the driver got nada.

Something they could do better: As mentioned earlier, we quickly realized that it would be crazy to take a camera on the boat. They could have an additional source of revenue by renting underwater cameras, as many dive shops do.

An environmental note: I’m not much of an environmentalist or animal rights advocate (to put it mildly), but I had some concerns about this whole thing. We were told not to touch the sharks, and didn’t, but I’m sure many people do, and as I mentioned, the sharks touched me several times. We were really close – which means the sharks had to be banging up against the boats, the outriggers, and the paddles. Can’t be good for them.

I also wonder about the effects of this on their behavior; they are being trained to seek their food in this manner – can they ever return to their normal behavior?

I’ve heard of efforts by some environmentalists in Manila to outlaw this. Which raises the question of what the people of Oslob are supposed to do to support themselves if it’s banned.
Posted by Bob Houk at 12:35 AM

Email ThisBlogThis!Share to TwitterShare to FacebookShare to Pinterest
Labels: Philippine travel, Things I Like in the Philippines