This has become just about my favorite food – next to Mexican or pizza, neither of which can be obtained here in a form recognizable to an American. But that’s another post. 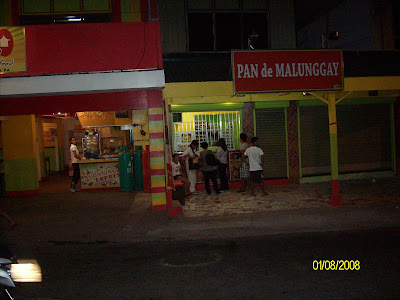 PdM is nothing fancy, just small pieces of bread, but very tasty. Since the store is just about across the street from my gym, I drop in after a workout and buy ten pans and a couple malunggay-flavored cookies (Cookies de Malunggay?). The pan is best hot from the oven, so I usually eat four and the cookies when I get home. The other six I put in the fridge and warm in the microwave for breakfast. Here’s breakfast: 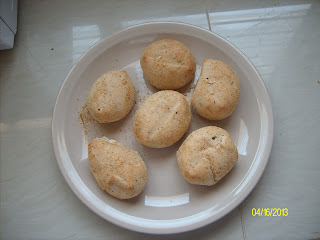 Since the pans cost two pesos each and the cookies are five, the snack and breakfast costs me thirty pesos ($0.75). Tough to beat pricewise.

For those of my age, you will remember the many TV ads of the 1950s that promised, usually for some cereal: “Tastes good, and it’s good for you, too.” What was good for us was that those lying ads turned us into skeptical consumers at an early age. But in the case of Pan de Malunggay, it’s true. Here’s the sign in the store (you might have to enlarge it to read the health claims): 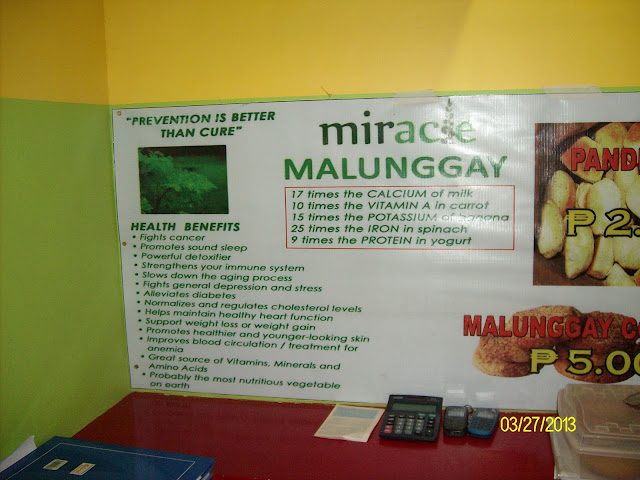 So, okay, I’m fairly certain it’s not all true. I particularly enjoy the line that says it will help you to both gain and lose weight – how does it do that?

The Philippines does not have much in the way of truth-in-advertising laws (another subject for another post), and bigger companies than this store tell even bigger whoppers. But the part of the sign giving the nutrition claims (17x the calcium of milk, etc) is somewhat true – or at least so Wikipedia says. Read this article on moringa (malunggay is the local name); apparently moringa is highly nutritious.

The leaves are the most nutritious part of the plant, being a significant source of vitamin B6, vitamin C, provitamin A as beta-carotene, magnesium and protein, among other nutrients ...

It tastes good and it's good for you, too. I think I may start a Pan de Malunggay franchise operation in the States when I return.
Posted by Bob Houk at 6:13 AM

Email ThisBlogThis!Share to TwitterShare to FacebookShare to Pinterest
Labels: Food, Philippine food, Things I Like in the Philippines