This article, and accompanying stats, confirms my own observations. I attended two games last season – a Diamondbacks game in Phoenix and the Cubs at Wrigley Field. There were few kids in evidence in Phoenix; I saw none in Chicago (Wrigley didn't even have soft drink vendors in the stands, beer was the only beverage available -- why bother to sell something for which there are no customers?) 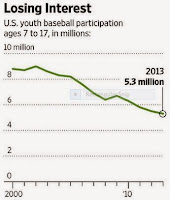 The ball fields at Delano-Hitch Park were covered in snow when Jim Wilson launched a campaign to keep them in use. As president of the City of Newburgh Little League, he had seen participation numbers plummet to the point where the league was in danger of folding. Now, he and the league’s board of directors were calling parents one by one, asking if their children would play this spring.To the extent that kids don't play the sport anymore, its future is in jeopardy.

Oh, and I should mention that the two games I went to last year, I left early, because they were so slow and long and boring.