The South China Sea May Be Coming to a Boil, so to Speak

It looks like there is growing awareness of the problems China’s aggressive stance in the South China Sea may present.

Here are some recent articles on the subject: 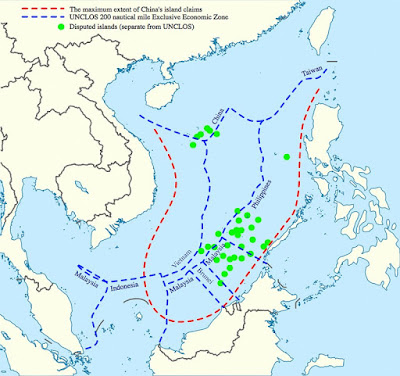 been building in the disputed zones.

Australian officials are concerned that China could also introduce long-range radar, anti-aircraft guns and regular surveillance flights that will enable it to project military power across a maritime expanse which include some of Australia’s busiest trading lanes.

Here’s another article that I’m including mostly because the map shows the incredible extent of the area China is claiming.

And finally, an argument that China sees a window of opportunity in the remainder of Obama’s term.

Eighteen months. That’s the timeframe Beijing has to test how much territory it can claim in disputed Asian waters, before a more uncompromising United States commander in chief takes over from a perceived militarily-passive President Barack Obama.
“The Chinese calculation is ‘run hard now’,” says Ernest Bower, a senior adviser for south-east Asia at the Centre for Strategic and International Studies in Washington.