All Aboard for Moldova!

We know of course that lots of people want a passport or residency rights in the US, or in one of the 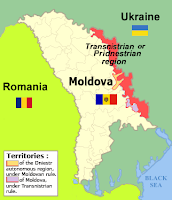 other safe, advanced, prosperous countries of the world.

And yet, there has been, in the past year or so, a sudden clamor for Moldavian passports, with most of the demand coming from their even poorer, more backward neighbor, Transnistria. What happened is that the European Union gave citizens of Moldova the right to travel freely in the EU.


And with that, the citizenship applications started coming in... The breakaway republic loyal to Russia is located on what Moldova considers Moldovan territory, and ever since Transnistria broke away relations between the parties have been frozen, not to say freezing, with no movement in either direction regarding Transnistria’s status. But Transnistrians themselves apparently have a clear idea of what they want.

Apparently about 74,000 of Transnistria's 500,000 people have applied for Moldavian passports. If that keeps up for long, Transnistria may become a country without people.


(Map is from Wikipedia: "TransnistrianRegionMap" by Serhio - Own work. Licensed under CC BY 3.0 via Wikimedia Commons)
Posted by Bob Houk at 6:13 PM