The Patron Saint of GAD?

There is a movement afoot to seek canonization for G. K. Chesterton, a popular writer of (among many other things) mystery stories. His most famous stories featured a modest and seemingly insignificant Catholic priest named Father Brown. 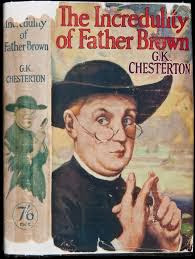 A note about the title of this entry: Those of us who are fans of mystery stories of the twenties and thirties refer to that era as the Golden Age of Detection, or GAD. As is usual with such designations, there are disputes about the exact time limits of GAD – the strict definition is expressed as ‘the interwar years’. I often think of books in the forties, fifties, and even later as GAD, but I am viewed as a liberal on this point.

In any case, Chesterton is an imperfect fit, since many of his stories were written before World War One; the first Father Brown collection, The Innocence of Father Brown, was published in 1911.

Nonetheless, he is generally thought of as being a GAD writer and was a major influence on others. My favorite mystery writer, John Dickson Carr, who began writing late in Chesterton's career, was such a big fan that he modeled his best-known detective, Gideon Fell, on Chesterton.

The Father Brown stories have been frequently adapted, most recently into a series that recently ran (and may still be running) on British television. I haven’t seen these, but I have been reliably informed that I should not consider this a deprivation – they are described by those who enjoy the original stories as (to use a phrase that seems apposite) god-awful. If you wish to explore Chesterton, I recommend instead that you read the books.

However good a writer he was, though, there appears to be a fair amount of controversy over the proposal, since Chesterton has sometimes been accused of anti-Semitism. Certainly some of his writings sound bad to modern ears.

If you wish to give some thought to the issue, here is a statement in support of Chesterton by the Chesterton Institute at Seton Hall University; here is an opinion article, strongly opposed, from a British Jewish publication, and here are two pieces that look at both sides from the BBC and Religion News Service.

I will not pretend to be an expert on Chesterton. I’ve read little beyond the Father Brown stories, I am not a Catholic (though I was raised in that church and maintain a cultural affinity and fondness for it), and thus I’m in no position to take a stand on whether he should or should not be considered for sainthood.

If his anti-Semitism was of a nature that it could be characterized as merely an acceptance and reflection of attitudes that prevailed in middle- and upper-class English society at the time (see Agatha Christie’s early books, written during Chesterton’s lifetime, for some nasty examples), then it would be deplorable, but not necessarily a stopper, in my opinion. No rule says that saints must have achieve perfection on earth, it being Catholic doctrine, shared by other Christian faiths, that perfection is an impossibility in an imperfect world. If he wrote, said, or did things that went much further, that could well be another matter.
Posted by Bob Houk at 7:19 AM