In the past month or so I’ve read three books from Erle Stanley Gardner’s second-string mystery series, Cool & Lam. 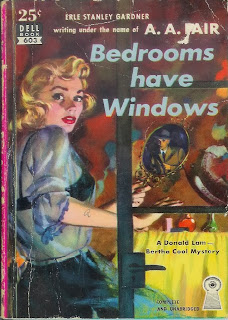 The books feature a detective agency consisting of a founder, Bertha Cool, and her junior partner, Donald Lam. In literary terms, it’s a very unequal partnership – the stories are at least 90% Lam.

Based on the three I’ve read, the formula is that a beautiful woman hires the agency, she and Lam engage in a lot of semi-sexy banter (though nothing more – these books were written more than a half-century ago), a murder takes place, Lam plays fast and loose with the evidence, he gets arrested for the murder by a hard-ass cop, he talks his way out of the arrest, solves the murder as well as whatever ancillary crime initially got them involved, and collects a large fee, making Bertha happy.

Bertha Cool is fat and greedy – beyond these characteristics, she barely exists in the stories I’ve read. Donald Lam is a disbarred attorney. Although the books have some noirish qualities in the style of the story-telling, Lam is the antithesis of the bare-knuckles noir hero -- he seldom fights, and when he does, he loses. When he's in a tight corner, he believes in trying to talk his way out.

The three books I’ve read are: 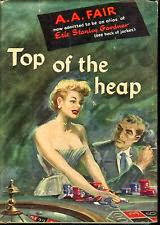 Bedrooms Have Windows (1948) – Lam is shadowing a conman in a hotel lobby when he meets up with a beautiful woman with whom he is soon, for reasons too complicated to explain, in a motel (actually an ‘auto court’) registered as husband and wife. Soon she disappears, just as a man and his mistress die in an apparent murder suicide in an adjoining unit of the auto court.

Lam tracks down the woman, walking into her bedroom as she is dressing. She begins to tell him the truth of her story then he goes to another room so she can finish dressing. When he returns, she has been murdered. Lam of course is arrested for the various murders.

Top of the Heap (1952) – The agency is hired to track down a couple women with whom the client spent a recent evening (in another auto court). Lam suspects that the whole thing is an effort to create a phony alibi for the client. Soon there is a murder in the mix (the reason for the phony alibi), and Lam is again arrested. 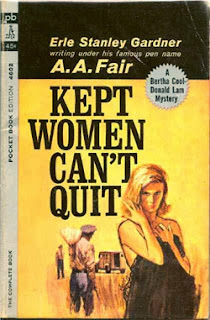 The most interesting aspect of this book is a really clever (I thought) money-laundering scam engineered by the murder victim.

Bertha is almost totally absent from this story, with the exception of a cringe-worthy appearance at the end in which her greed is caricatured in a heavy-handed manner.

Kept Women Can’t Quit (1960) – An armored car robbery turns into a murder case when one of the participants is murdered. Except he wasn’t a participant. Lam, who is working for the victim’s gorgeous girlfriend (the ‘kept woman’ of the title) is arrested for the murder, of course.

Very clunky solution, in which a character who only briefly appeared in a supporting role very early in the story suddenly reappears and turns out to be the killer (even though there has been nary a clue pointing to him anywhere in the book).

All of these books have huge flaws, but they are still fun stories to read.
Posted by Bob Houk at 7:40 PM

Email ThisBlogThis!Share to TwitterShare to FacebookShare to Pinterest
Labels: Books