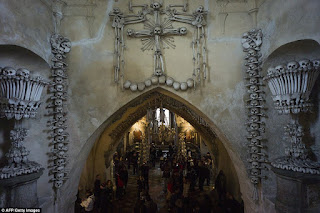 This is pretty far off-topic even by my very loose standards, but I found it really fascinating. In the Czech Republic, there is a church called the Sedlec Ossuary, aka the Skull Church. It is ‘decorated’, if that is the right word, with the remains of tens of thousands of plague victims.


It’s a real-life chapel that looks like the set of the Pirates of the Caribbean.

The spine-tingling Sedlec Ossuary in the Czech Republic is estimated to hold the remains of between 40,000 and 70,000 people, many of whom died in the plague in 1318 and during the Hussite Wars in the 15th century.

More pictures here.
Posted by Bob Houk at 10:30 AM

Email ThisBlogThis!Share to TwitterShare to FacebookShare to Pinterest
Labels: Religion