The Most Sought-After Endorsement

Dennis Rodman has announced his choice for president. Guess who?

Actually, who else could it be? When a clown makes an endorsement, naturally he is going to endorse a fellow clown. 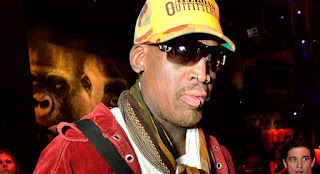 Dennis Rodman has endorsed Donald Trump for president. On Friday, the five-time NBA champion tweeted that the Donald “has been a great friend for many years.”

"We don’t need another politician, we need a businessman like Mr. Trump! Trump 2016,” he added.

Trump responded on Twitter, writing, “Thank you @DennisRodman. It’s time to #MakeAmericaGreatAgain! I hope you are doing well!”