Pew tells us that the illegal (or ‘unauthorized, as the PC crowd prefers) immigrant population has held roughly stable over the past five years. This is in line with other data I’ve seen.


An estimated 11.3 million unauthorized immigrants lived in the U.S. in 2014, according to a new preliminary Pew Research Center estimate based on government data. This population has remained essentially stable for five years after nearly two decades of changes.  […] 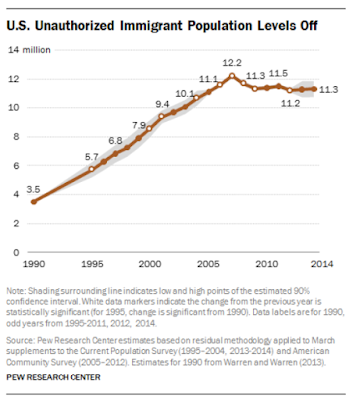 Due to the slowdown in new illegal immigration since the Great Recession, unauthorized immigrants are less likely than those in the past to be recent arrivals. The share of unauthorized-immigrant adults who have lived in the U.S. for a decade or more has nearly doubled, from 35% in 2000 to 62% in 2012, according to a Pew Research estimate released last year. Only 15% in 2012 had lived in the U.S. for less than five years, compared with 38% in 2000.