The Biggest Plane Ever Built

If you’re minimally knowledgeable about such things, when you saw the header, you said, “Oh sure – the Spruce Goose.” At least, that’s what I would have done. But seventy years later, there’s a new
title-holder. 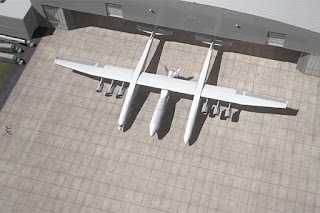 The Stratolaunch is currently in production at California’s Mojave Air and Space Port. Aerospace firm Scaled Composites has headed-up development of the mammoth aircraft, and befitting such a sizable plane, the technical details are jaw-dropping. Stratolaunch, nicknamed “Roc” after the mythical bird of prey, features two fuselages, six Pratt & Whitney jet engines, 28 landing gear wheels, and a whopping 385 foot wingspan.

“If you were to put the center of this airplane on a football field,” mentions Scaled Composites president Kevin Mickey in a KGET interview, “its wingtips would extend beyond the goalposts by about 15 feet on each side.”

Those dimensions make it 65 feet wider than the legendary “Spruce Goose” H-4 Hercules … it is being constructed using pieces of two already quite large planes–a pair of disused Boeing 747s.

The purpose of the plane is to launch satellites.


The Stratolaunch is designed to carry a three-stage rocket (equipped with a satellite) between its two fuselages. Upon reaching the correct altitude, the rocket will detach, blast off into space, and later release the satellite.