How to Print a Bridge

I still want my flying car. I was promised one, and I expect the promises to be fulfilled.

In the meantime, though, this is almost as cool. 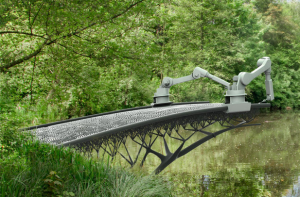 The 3D-printed home has been accomplished — and apparently the next step is something a little more structurally challenging. A 3D-printing company based in Amsterdam has developed a revolutionary, multi-axis robotic 3D printer that can “draw” structures in the air — and it’s planning to build a bridge over a canal in the heart of the city.

Construction is scheduled to begin in September. The accompanying picture is an artist’s conception of the process. A video and bridge plans are at the link.
Posted by Bob Houk at 8:00 AM

Email ThisBlogThis!Share to TwitterShare to FacebookShare to Pinterest
Labels: Technology