Who doesn't want a laser cannon mounted on top of their car? It's such a simple, elegant solution to annoying traffic problems.

While that appears to not be what this device is intended for, the reviewer notes that it could be mounted on the roof rack of his Volvo. My Kia is small and I don't have a roof rack, but I think it could be fitted with a few modifications. 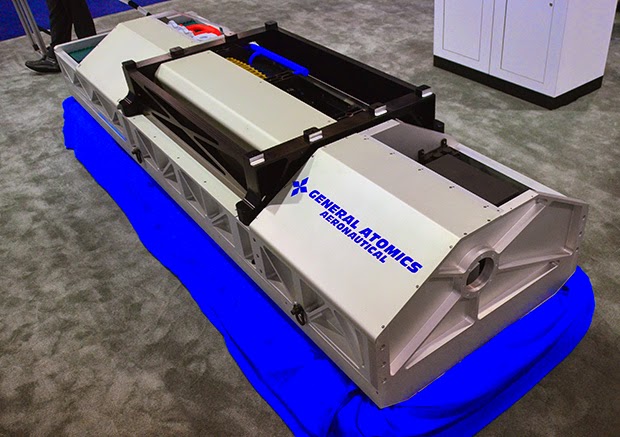 The thing in this picture isn’t a photon torpedo. But, it’s close. It’s a photoncannon, currently under development by General Atomics. Small, versatile, and completely self-contained, it turns anything onto which you stick it into apowerful laser weapon. And at just two cubic meters in volume, you should have no trouble mounting it on the roof rack of your Volvo.

General Atomics’ Tactical Laser Weapon Module is one of those pieces of futuristic technology that can show up out of nowhere at a military expo (in this case, the Navy’s Sea-Air-Space Exposition) and just sit there, attracting plenty of attention while also being almost entirely classified.

What we were able to find out about this thing is that it’s a laser weapon with output energies (that's output, not total power in the system) ranging from 75 kilowatts all the way up to 300 kilowatts. To put that in perspective, about a year ago we wrote about how Lockheed was using a portable fiber laser to shoot down rockets at a range of 1.5 kilometers using just 10 kilowatts of power. Suffice it to say, 300 kilowatts is rather a lot.

The thing runs off lithium-ion batteries, so it wouldn't even drain my car battery, though I'd have only a limited number of shots.


You don't even need to connect the module to an outside power source; it’s packed with enough lithium-ion batteries to give you some number of shots (although, as with almost every question we asked, General Atomics won’t give us specific numbers, because it’s, well, classified).

How many shots would I need to clear the road between Phoenix and Pine? I figure once I've turned two or three cars into smoldering heaps of liquified steel and plastic, word would spread and nobody would give me any further cause for annoyance.
Posted by Bob Houk at 9:40 PM

Email ThisBlogThis!Share to TwitterShare to FacebookShare to Pinterest
Labels: Miscellany