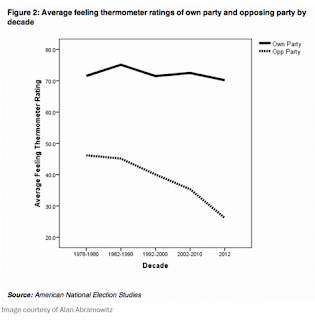 It is not at all an original observation to note the increasing negativity of the political scown-opposing partyene, in which partisans of both sides see each other as not just wrong, but evil. I’m actually old enough to remember when it wasn’t like this, when people respectfully disagreed in civil discussions rather than shouting matches.

As an aside: Fox and MSNBC would not have prospered in such an environment.

At right is a graph showing how bad things have become.
Posted by Bob Houk at 10:00 AM