I went to the website of the Arizona Capitol Times, a weekly Phoenix newspaper dealing with politics and government, because they came up on a Google search as having an article that I was interested in; however, they wouldn't let me read the article because I'm not a subscriber. Fine -- that's absolutely their right, and I have no argument with publishers who take that approach.

I didn't care enough about the article in question to pay their subscription prices, though, so I passed. 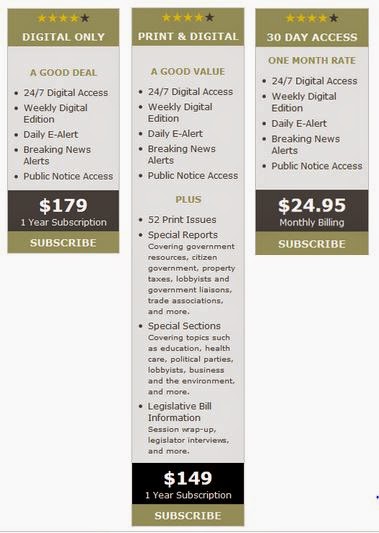 But then I looked more closely at their offer.

Read that again -- I had to do so several times before I was sure I had read it right. They are charging thirty bucks less for both formats than for digital only.

Though this seems on the face of it to be totally insane, the reasoning is not too hard to figure. Publishers can make more selling print ads than they can for online advertising. Therefore, the publisher is willing to give you a thirty buck discount if you'll just pretend to be a print subscriber so that they can charge their advertisers a bit more. "Hey, don't worry, you can just throw it away when it arrives."

Presumably they can, or think they can, sell enough additional ads to more than offset the discount (and to pay printing and delivery costs on the extra papers they're sending to people who don't really want them). But one wonders how long advertisers will keep paying for those ghost readers.
Posted by Bob Houk at 3:58 PM